David Anderson graduated from Tenaha High School in 1968 and from Baylor University in 1972 with a B.B.A. in Accounting. After completing his studies, Judge Anderson returned to Tenaha where he worked for his family’s sawmill, lumber, and timber operation, Anderson Mfg. Co, as general manager for over twenty years. During this time, he also obtained his Real Estate Brokerage license, became a certified EMT, and served as a Reserve Deputy in Shelby County for three years.  In 2002, Judge Anderson was elected County Judge in Panola County and served in office for over twelve years. After completing three terms in 2015, Judge Anderson did not seek reelection but remained involved in his community. At present, he is an active member of the Carthage Volunteer Fire Department, Chairman of the Finance Committee and Sunday School teacher at Central Baptist Church, and a member of the Rotary Club and Panola County Chamber of Commerce. When Judge Anderson is not engaged in quality time with his wife, Elizabeth, three children and their spouses, and ten grandchildren, he enjoys traveling, martial arts training, and reading.

Carolyn P. Murphy is General Counsel and a Human Resources Officer with First State Bank and Trust Company. She is a 2007 graduate of Captain Shreve High School in Shreveport, Louisiana, 2011 magna cum laude graduate of Elon University with a B.A. in Human Services, and 2014 graduate of Mississippi College School of Law with a Juris Doctor. She is a member of the Texas Bar, Shreveport Bar, Junior League of Shreveport-Bossier, Shreveport-Bossier Tri Delta Alumnae Chapter, Panola College Foundation Board, and Broadmoor Baptist Church. She enjoys running marathons, reading historical fiction, and traveling. As a fourth generation member of the Board of Directors, Carolyn is appreciative for the opportunity to continue the legacy of her great-grandfather, B.F. Payne, founder of First State Bank and Trust Co., and serve the citizens inside and outside of Panola County.

Jim Payne, Chairman of the Board and CEO of First State Bank and Trust Company, would like to announce the promotion of Mitch Davis to Assistant Vice President.

Mitch has been employed with First State Bank & Trust Company since 2015, working in the Loan Department as a Credit Analyst and a Loan Officer.

She brings with her 36 years of banking experience focused on personalized customer service.  She has worked at every level of banking from teller to manager.  She enjoys volunteering in her community and has served as Trustee for Elysian Fields ISD, and president of Harrison County United Way.

Lisa currently serves as treasurer for Elysian Fields Volunteer Fire Dept. and attends Cross Roads Baptist Church.  She and her husband of 37 years, Jeff, currently live in Elysian Fields.  They have two daughters, Lee Ann of Marshall, and Lydia of Bossier City.

First State Bank and Trust and C.E.O. Jim Payne congratulates and appreciates the following employees for their dedicated years of service and commitment to customer service: (Pictured L to R) 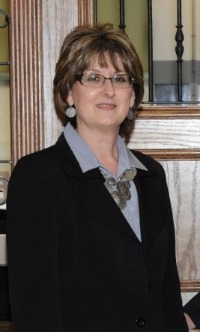 FSBT’s CEO Jim Payne was inducted into the Carthage ISD Distinguished Alumni Hall of Fame at Carthage High School’s Homecoming Game on October 12. As a graduating member of the class of 1962, Jim has been a leader at FSB&T and the Panola community for over fifty years. Congratulations, Jim!

First State Bank is proud to announce Cheri Jamison and Dennis Lagrone as our 2018 Employees of the Year. Cheri is a representative with our New Accounts Department and Dennis is a member of our Loan Department. We thank them for their commitment to our customers, willingness to assist co-workers in times of need, and desire to see our institution continue to succeed.

Jim Payne, Chairman of the Board and CEO of First State Bank and Trust, announces the promotion of IT Manager Kathy Porter to the position of IT Officer. Kathy has served in the IT department since 2006. Please join us in congratulating her on this achievement.

A fond farewell and best wishes to Mattie Stillwell, First State Bank’s Bookkeeping Associate, on her retirement after thirty-three years of service. Thank you for your loyalty. Enjoy your new life chapter! 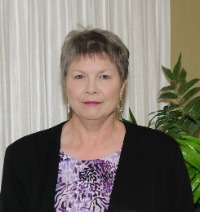 Congratulations to First State Bank Officer and Assistant Auditor, Gwen Singleton, on her retirement! After thirty-three years of dedication to us, Gwen is moving on to spend time with family and friends. Thank you and best wishes, Gwen!

First State Bank & Trust presented tenure pins at the company Christmas party on December 7th. We thank these recipients for their years of service. (from L to R)

First State Bank and Trust’s Assistant Cashier, Judy Wilkerson, is retiring after thirty-three years. We thank her for her loyalty and service. 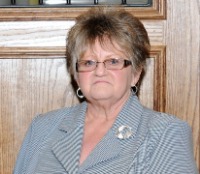 First State Bank and Trust’s Assistant Cashier, Debra McMillan, is retiring after thirty-three loyal years of service. We wish her well in her next life chapter.

First State Bank proudly announces Lori Allen as its 2017 Employee of the Year. Her tireless work ethic, commitment to customer service, and loyalty to the institution is greatly respected and appreciated! 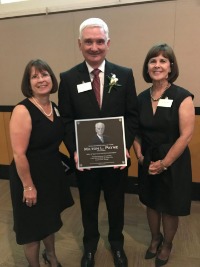 First State Bank's former President and Chairman of the board, Milton Payne, was posthumously inducted into the Texas Bankers Hall of Fame last night at Sam Houston State University. His brother, present CEO and Chairman of the Board, Jim Payne, accepted the award on his behalf.

Jim Payne, Chairman of the Board and CEO of First State Bank & Trust Company would like to announce the promotion of Melissa Edge to the position of Trust Officer.

Melissa joined First State Bank & Trust Company in January of 2012 and has served in the trust department since 2013. She holds a Bachelor of Business Administration in Finance from Stephen F. Austin State University. Melissa is a native of Fort Worth and moved to Carthage when she married her husband, Chad Edge. They have three children, Ashlyn, 18, Abi Grace, 13 and Landon, 4. Together, they stay very active supporting their children in various sports and currently attend First Baptist Church of Carthage.

First State Bank and the Murphy-Payne Charitable Trust "Back the Blue" with their donation of sixteen assault body armor for law enforcement officers in the Carthage Police Department and the Panola County Texas Sheriff's Office.

First State Bank and Trust Co.celebrated and supported the educational pursuits of the Carthage ISD Education Foundation with a donation of $10,000 at the Foundation’s annual kick-off dinner on October 28. Our employees and Board of Directors believe in the education and growth of our local students! 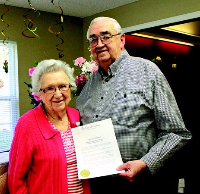 Established by the National Council of Assisted Living in 1995, the National Assisted Living Week provides a unique opportunity for residents, families, staff, volunteers, and the surrounding community to come together to share with senior residents a variety of events and activities that show them how much their communities care for them.

Lynn Vincent is in charge of Public Relations at First State Bank and Trust Company.

(Photos courtesy of The Panola Watchman) 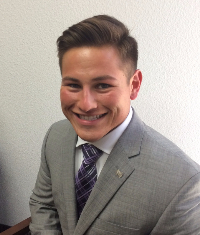 Jim Payne, Chairman of the Board and CEO of First State Bank andTrust Company, would like to announce the addition of MitchDavis to the Loan Department.

Some of his honors include receiving top GPA in the school of business, being inducted into the Beta Gamma Sigma business honors society, and he was also a founding father of the Pi Kappa Alpha Fraternity. 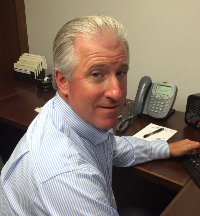 He holds a Bachelor of Business Administration in General Business from Stephen F. Austin State University. Mike married Cristi Preston Whiddon. They have one child, Mason that is 11. Mike and his family currently attend First Baptist Church in Carthage. Mike is active in the community through the Tatum Lions Club and various youth sports leagues. 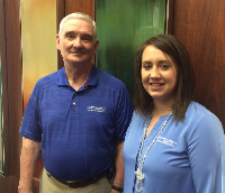 Jim Payne, Chairman of the Board and CEO of First State Bank and Trust Company, would like to announce the promotion of Ginny Collins to the position of BSA Officer.

Ginny is a 2009 graduate of Carthage High School and attended Panola College. She joined First State Bank and Trust Company in 2010 and served in the positions of bank teller and lead teller before moving to the BSA/Fraud department in 2013. In addition to her BSA duties, Ginny also assists customers with debit card fraud and other banking fraud.

Ginny and her husband, Craig Collins, live in the Woods Community with their five-month-old daughter, Reese. They are active members of Woods New Hope Baptist Church.

Jim Payne, Chairman of the Board and CEO of First State Bank & Trust Company, would like to announce the addition of Jameson Ritter as Controller.

Jameson is a 2002 graduate of Carthage High School and a 2006 graduate of Stephen F. Austin State University. He holds a Bachelor of Business Administration in Accounting and a Master of Professional Accountancy. Jameson is also a Texas Certified Public Accountant. After college, he moved to Tyler and worked as both a staff and senior accountant for Henry & Peters, P.C. Jameson spent his most recent six years as the plant controller for Tyson Foods in Carthage.

First State Bank and Trust Company is pleased to announce the promotion of Gene Giles to President by the Board of Directors in March 2015.

Mr. Giles has been employed with First State Bank and Trust company since 1978. During his 37 year tenure, he has served in many positions, most recently as Senior Vice President and Chief Lending Officer.

A Panola County native, Mr. Giles was born to the late Charles Ross and Fay Cariker Giles of the Long Branch Community. He is a graduate of Carthage ISD, Panola College, and Stephen F. Austin State University where he received a BBA in Management.

Deeply rooted in the community, Mr. Giles has served with organizations such as Mission Carthage and the Salvation Army. He is Vice President of the Panola College Foundation and Vice President of the Panola College Alumni Association. He is an active member of the Carthage Volunteer Fire Department, National Volunteer Fire Council, State Firefighters' and Fire Marshals' Association of Texas, Texas Commission on Fire Protection, Panola County Chamber of Commerce, Panola County Cattlemen's Association, Lions Club International, and Central Baptist Church.

Mr. Giles married Brenda Sue Watson Giles in 1977. Mrs. Giles retired from Carthage ISD where she served as an educator for 37 years. Their two daughters and their husbands, Crista and Michael Black and Cara and Brian Morris, bring much joy into their lives, especially with grandchildren, Cameron, Connor, Landry, and Campbell.

Mr. Giles would like to thank the Board of Directors, employees, and customers of First State Bank and Trust Company for the support they have shown him over the years.

Jim Payne, Chairman of the Board and CEO of First State Bank & Trust Company, would like to announce the addition of Carolyn Payne Murphy as General Counsel.

Carolyn's employment with the bank is one of professional and personal significance. She is the great-granddaughter of B.F. Payne, a founder of First State Bank & Trust Company, granddaughter of Mary Frances Payne and Foster Murphy, who currently serves on the Board of Directors, and daughter of David Murphy, Executive Vice President. Carolyn considers this as both a privilege and a blessing to serve the citizens of Panola County, while carrying on the tradition of her family. (Photo courtesy of The Panola Watchman)